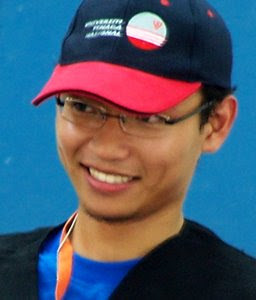 Did u know him, Saiful Bukhari?

He is the one who being sodomized by Anwar Ibrahim. Guess what, now he blogs too! He started blogging in July 2008. In his blog, only has 3 entries, but already had more than 80,000 hits! Awesome!

High court today is informed that the sperm found at Saiful's underwear is owned by "Y Guy". Which the sperm is not owned by Anwar Ibrahim!! Who is that Y guy huh??

Saiful Bukhari's black underwear was found at his condo (Seluar dalam Saiful Bukhari)
We dunno who is actually a liar. Only themselves know who actually is!!

The Blogger Formerly Known As "Me" said…
Hi. I`m fascinated by your blog. Especially the brutal arts, there so cool. But I wouldn`t like if it were real pictures. Well, could we have a link exchange ? My blog is about Nintendo. It is called http://gamesfurk.blogspot.com
August 6, 2008 at 2:59 PM

Anonymous said…
It sounds like you're creating problems yourself by trying to solve this issue instead of looking at why their is a problem in the first place.

Anonymous said…
Wow! what an idea ! What a concept ! Beautiful .. Amazing …